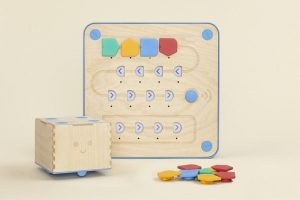 Cubetto, a robot created by Primo Toys, is a cube-shaped robot that is programmed by adding shapes to a control board. This description is from their web site: “Meet Cubetto: the friendly wooden robot toy for kids aged 3-7, chosen by 20000 parents & teachers to guide kids on coding adventures without screens.“

Having discovered Cubetto from another educator on Twitter, I started researching it and decided this would be an excellent tool for teaching the basics of coding to our younger students. I shared the information with our Chief Technology Officer and our Middle and Upper School programming instructors who were equally excited. Our CTO even found some extra funds to purchase one!

A couple days later, Cubetto was introduced to our Kinder students. As you can see, the mats are small. There is no way you can fit an entire class around one so I asked the teachers to split their class into two groups each. One group worked on the Lego Wall while the other explored Cubetto. We switched after about 15 minutes. 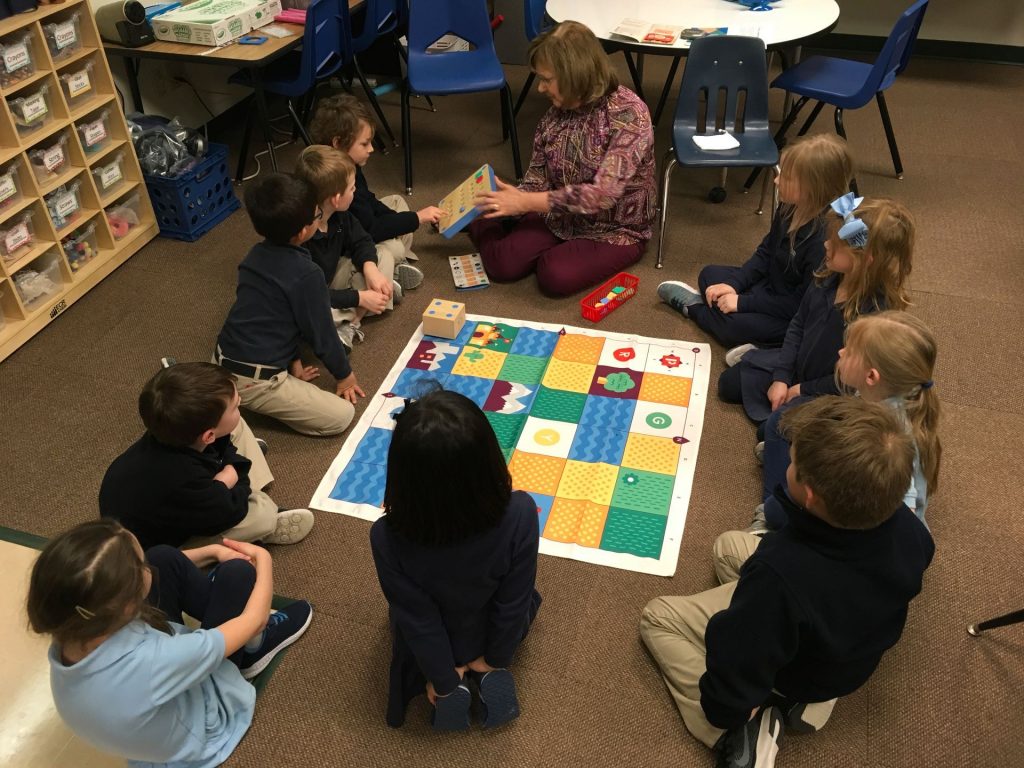 We started by discussing the mat – geographical features, compass rose. It turned out that the students had spent the week learning about maps so this fit perfectly into their curriculum. The blocks were introduced by letting the students try them one a time to see how the robot responded. The function block brought puzzled expressions! By itself, of course, it does nothing. To a young child, the first reaction is that it doesn’t work! Later, they were able to see its benefits. 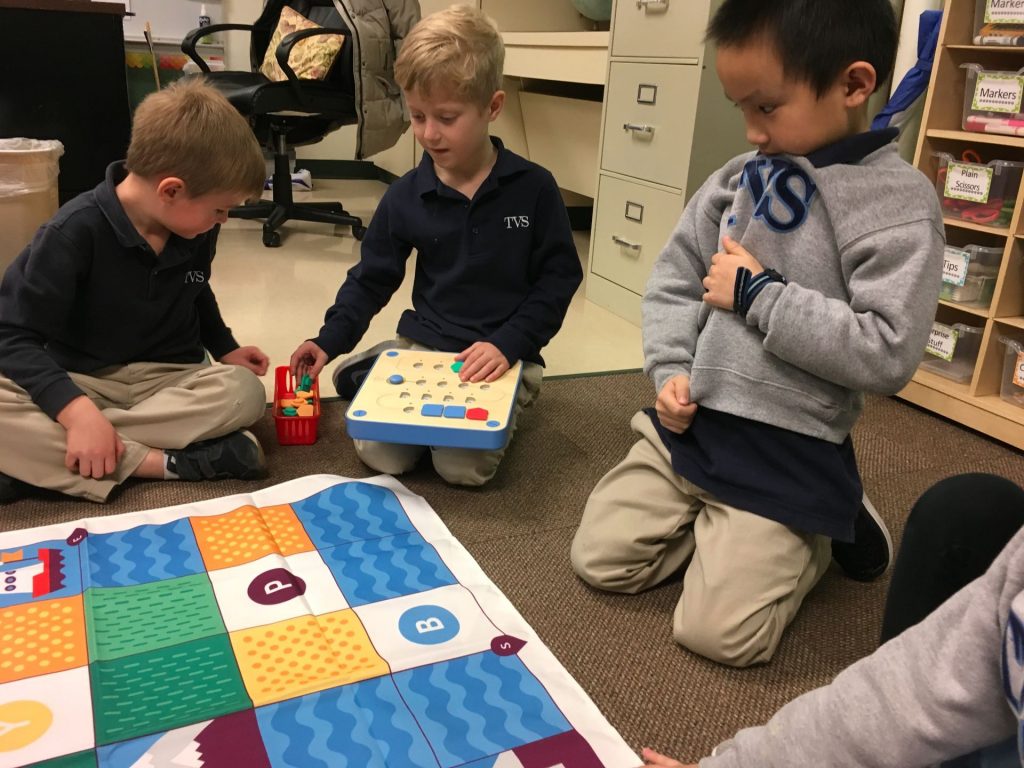 Then I gave a challenge – “Cubetto wants to travel to the mountains. How do we program it to get there?” As the control board was passed around to each child, we talked through blocks to choose. Then, we pointed to each block as Cubetto followed the commands. Of course, there were some “bugs” to work out which produces great problem-solving. Using the function blocks is necessary because there aren’t enough “go straight” blocks. That’s a hard concept for little ones but it will come with practice. You can see in the picture below that we were using the function blocks to represent 4 go straight blocks. 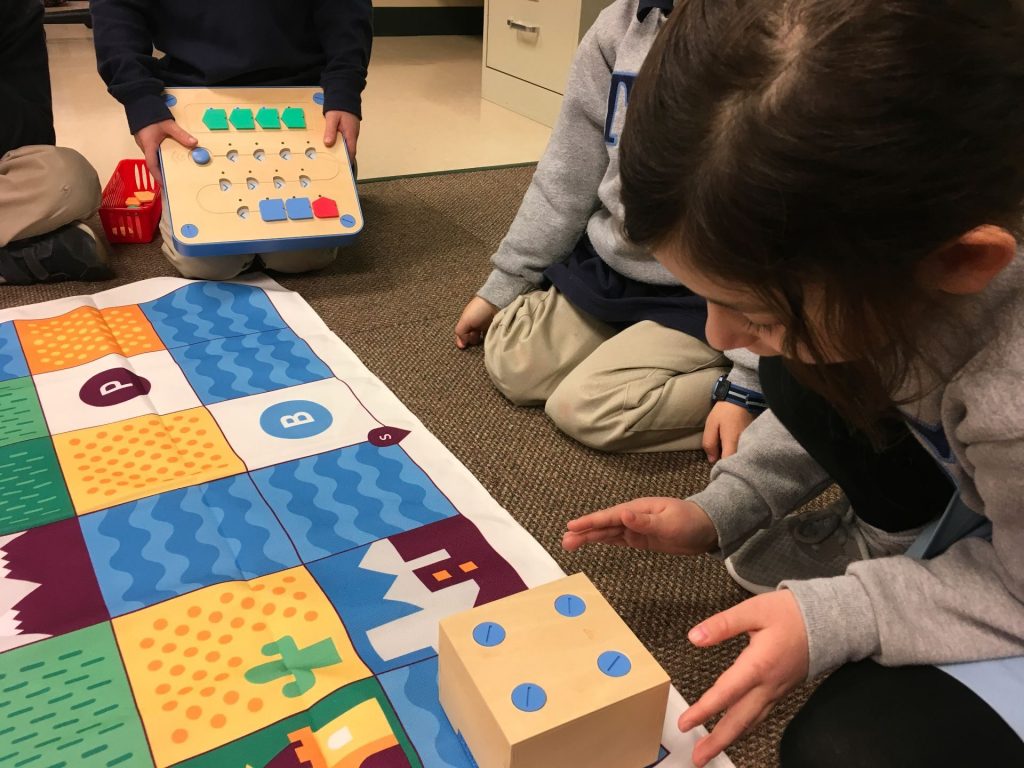 Everyone worked together quite well. A couple of the students really caught on quickly; you could practically see their analytical minds working! Some children were hesitant to make a decision about the type of block to insert but classmates were eager to offer advice and encouragement.

During the last group, it seemed to be taking longer than any other group to go around the circle so that everyone had a turn to add a block. Turned out, this group was actually larger than the first – one little boy apparently enjoyed Cubetto so much that, instead of going to the Lego wall, he just joined the new group to work with the robot again!

Judging from the reactions of the students, the Cubetto robot was a HUGE hit!

Would I Buy it Again?

YES!! This is an excellent tool for helping young children understand the concepts of coding!