I will preface this by saying that paper blogging is not my idea! It’s one of those, “Wow! Why didn’t I think of that!” activities.

A couple of years ago, desperately wanting to take student blogging to a level past the “Hi. How are you? What are you doing?” stage, I started searching for ideas – and came across a wealth of information!

The following resources introduced me to paper blogging.

Who would have thought that students coming to a computer lab would become so engrossed in writing that they never once asked when they would get on the computers! Now, even though the students have blogged for the past few years, I always start with this unit – just to make sure students refocus on the intent of our blogs: To share their learning in a positive and meaningful way.

Taking the food idea from Leonard Low’s Workshop Activity: Paper Blogs, I asked students to raise their hand if they liked to eat. Of course, that brought an enthusiastic response! I told them that they would be writing a blog post on paper and the following day would be spent writing comments using sticky notes.

The instructions were to write about a favorite food – it could be from a restaurant or something made by parents, relatives, or anyone else. They needed to write something that would paint a picture for the reader – use details! Pictures always spruce up a post so illustrations were strongly encouraged.

The paper was distributed and we worked together to include the basics of a post:

Then the students scattered in the small room to find a space to write. At first there were murmurings about their topic and how delicious their chosen food was (and how hungry they were becoming just thinking about it . . .), but soon all you could hear were pencils and pens scratching across the paper. 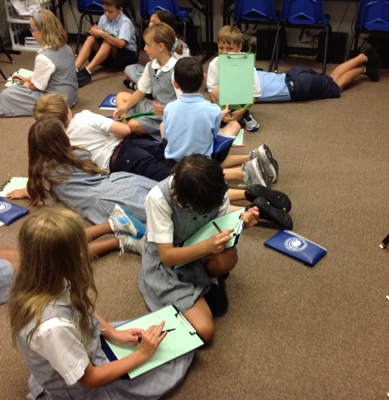 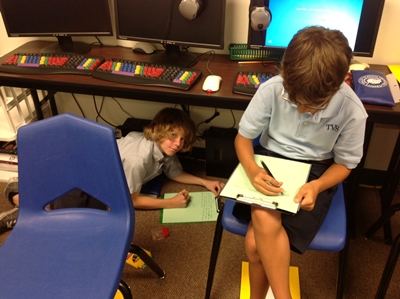 The next day was commenting day. I had folders on the keyboards and 6 sticky notes on the folders ready for students when they walked in. Using information from Mrs. Yollis’ third graders on How to Write Quality Comments, we discussed what kinds of comments would encourage a conversation as opposed to those that would stop the discussion. We discussed how important it is to avoid comments such as: Cute! Wow! That’s awesome! because these didn’t further the conversation.

I am pretty sure that the idea of penny and dollar comments comes from Silvia Rosenthal Tolisano and we use this often. (If not, I sincerely apologize and ask that you let me know!) This is where you compare a penny to a comment – you can’t buy anything with just one penny so it’s basically worthless. On the other hand, you ARE able to buy a few things with a dollar simply because it’s worth more.

That’s the way comments are. Penny comments are pretty much worthless. They really don’t tell you anything. They are often just a word or two OR they are completely unrelated to the post. But a dollar comment offers so much more! It acknowledges the author, asks questions, gives details, relates to the writer. In this day and time, though, we don’t just talk about dollar comments. With inflation, our students decided that $20 and up comments were much better than a measly dollar!

After the discussion, instructions were given. Students were to leave their paper blog at their computer but take the sticky notes with them. I had them stand behind their chair then told them to count 4 chairs clockwise. They were to stop at that spot, read the blog and write a comment (being sure to put their first name on the sticky note).

When finished with the first comment, students were told that from now on they would need to read the post AND all comments. It’s important to do that so that they don’t repeat someone else’s responses. 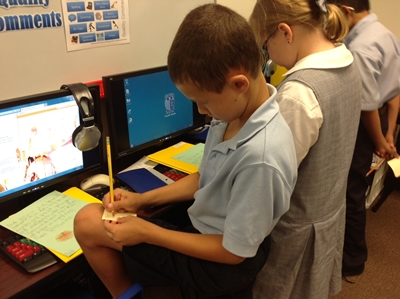 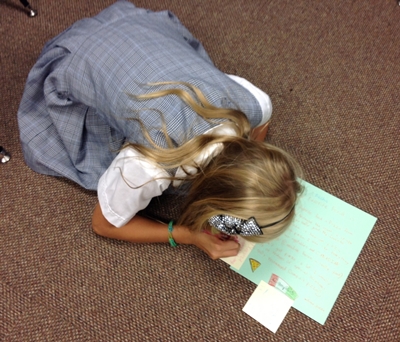 We continued to make the rounds until there was only one sticky left. At that point, students were instructed to return to their own blog, read all comments, and then choose one to write a response.

After that we regrouped to reflect. Some things that were brought up included: 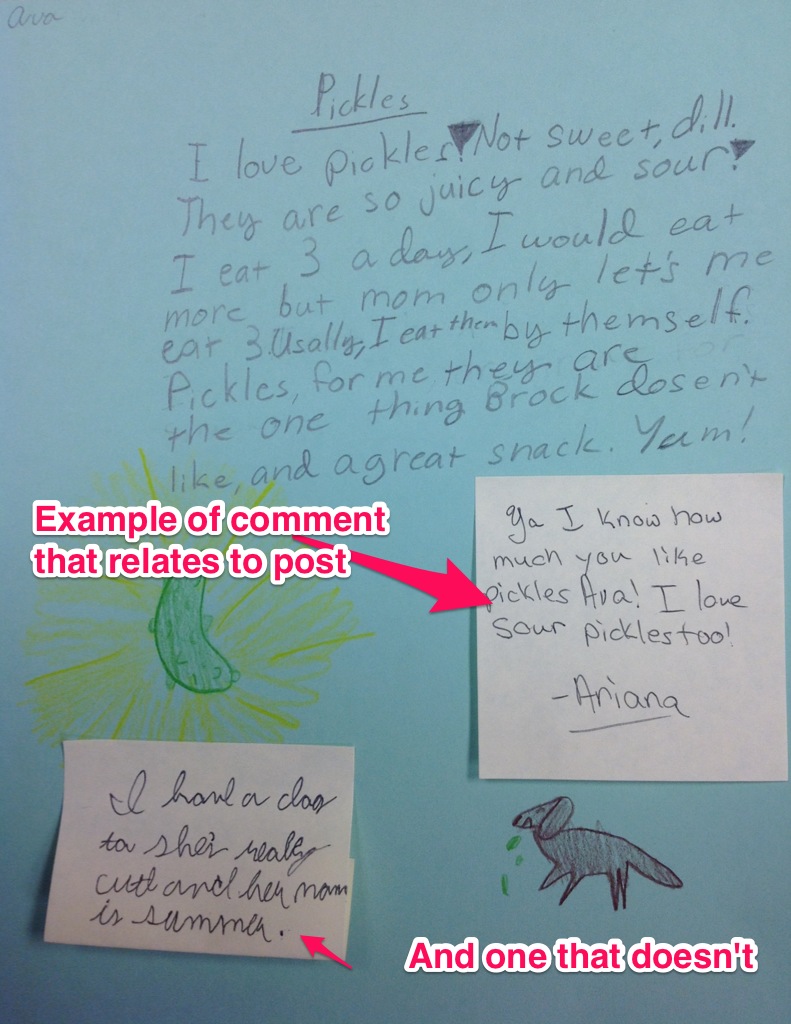 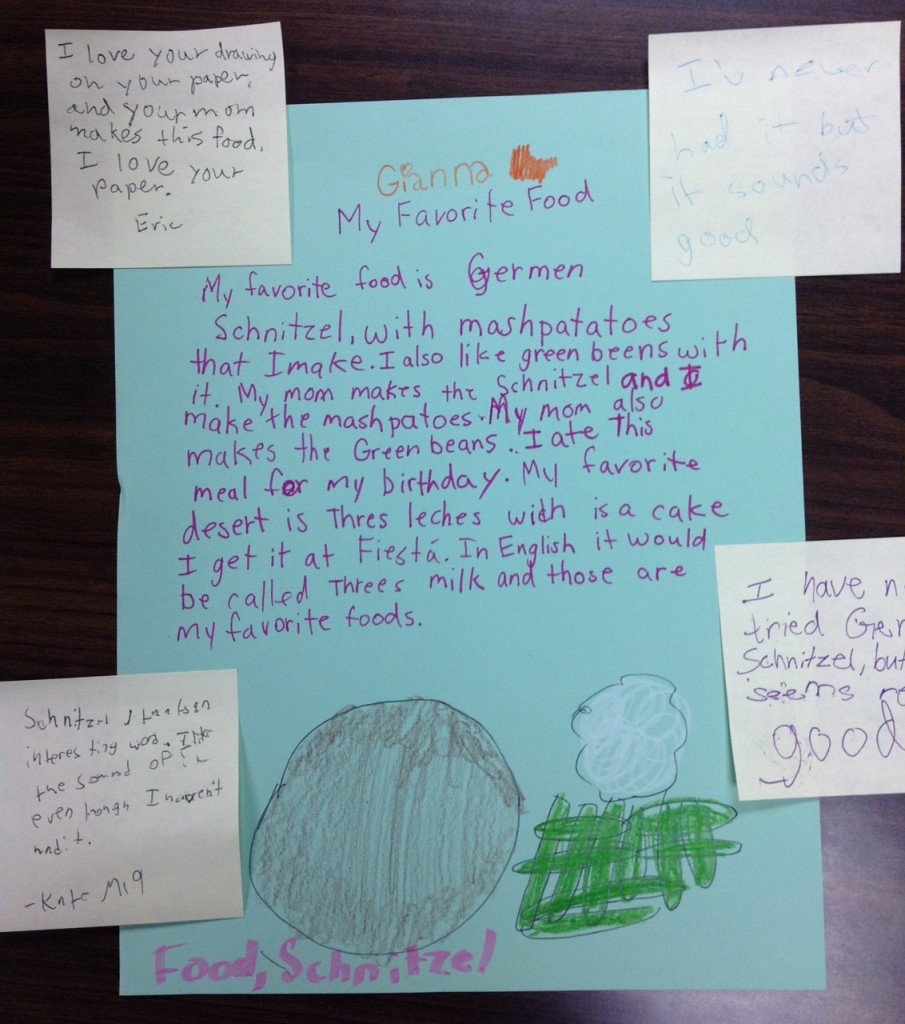 I have to say this is my all-time favorite activity! The students really get into paper blogging and I have NEVER had anyone complain that they came to the lab but never got on the computer! This is such a worthwhile activity to do to prepare students for online blogging. I can’t wait to get them going in KidBlog!

4 Comments on When Paper Blogging Trumps the Computer!